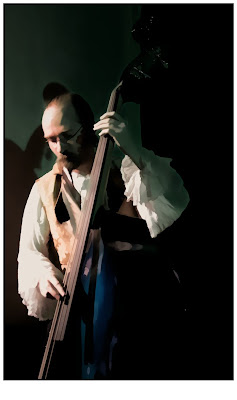 Early bands in the 80's and 90's included PSST, Branchalla, Soma inside, & Pod(not the famous American one) - To get a feel for the North Wales music scene at this time watch the fantastic film "Vinyl" it really was like this, and Ken frequented the club mentioned, the "Bistro" - or as it was known - the Bizzy.

His travels gradually took him further South and his musical tastes became less aggressive. At some point he became aware of French and Breton dance, and was soon whisking his way around the dance floor. Eventually the musicians found out he played bass, and the rest is as they say history.

Home
Subscribe to: Posts (Atom)
Music and Instruction for Breton and French dance.

Take an accordion, guitar, four fiddles, mandolin and mandola. Mix well and add a touch of bass. Apply liberally to a tasty selection of French and Breton dance tunes. The perfect recipe for a full-flavoured Fest Noz!