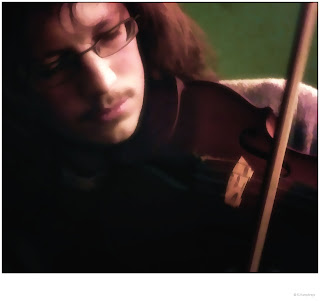 Gwilym was born in Aberystwyth and raised a few miles north of there. He began learning the fiddle at 7 and joined the local Welsh dance team at 11 as a musician. During this time he met Annette, though didn't encounter Breton or French dancing until his early twenties. He then began playing with both Annette and Geoff, working with them on a few tracks of their album 'First Light - Y Bore Bach', and gradually became a regular part of their line up and that of the newly formed Kantref.

Gwilym has played in twmpath and ceilidh bands for the last 17 years and for bals and fest noz for the last 6. He has played gigs and taught workshops for the fiddle and for ensemble in the UK, France and Canada. He currently lives in London.

Home
Subscribe to: Posts (Atom)
Music and Instruction for Breton and French dance.

Take an accordion, guitar, four fiddles, mandolin and mandola. Mix well and add a touch of bass. Apply liberally to a tasty selection of French and Breton dance tunes. The perfect recipe for a full-flavoured Fest Noz!